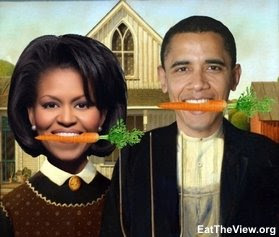 On Friday, March 20th, 2009, 23 third graders joined First Lady Michelle Obama on the South Lawn of the White House to break ground on an 1100 square foot kitchen garden that will provide organic produce for the first family and for world leaders and guests at formal dinners. In an effort to lead by example and to encourage others to plant a garden, the garden is being planted so it is visible from the street. A food garden was last planted on the White House lawn in 1943 by Eleanor Rossevelt during a time in our country's history similar to our current struggles - the economy was weak and the country was at war. According to the New York Times, the garden will have 55 varieties of vegetables grown from organic seedlings started at the executive mansion’s greenhouses. Michelle Obama says the garden will be a family affair with everyone helping out including the president.
Posted by me :) at 5:15 PM