The Gulf of Mexico is home to the critically endangered Kemp's Ridley sea turtle. Sea turtles have been seen swimming through the toxic oil-filled waters of the Gulf and rescue attempts are now being called off. According to Mike Ellis, BP has been keeping rescue teams from getting to the turtles and has even been burning them alive, along with other animals. View biologist Catherine Craig's interview with boat captain Mike Ellis on you tube for more info: 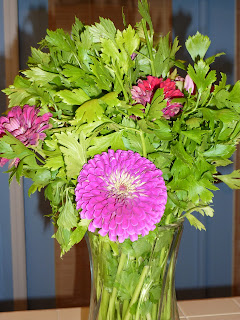 I had some friends over the other night and one brought the most unique green bouquet for me! She had cut celery and zinnias from her garden and arranged them together. The bright green celery made the vibrant zinnias just pop and the celery's fresh scent greeted every time I entered my kitchen. The best part of the beautiful gift is, as the flowers fade I will compost the flowers and eat the celery. My creative friend shows a perfect example of how being green sometimes means just thinking outside the box.
Posted by me :) at 9:55 AM 1 comment: Links to this post

The Environmental Working Group has released its 2010 Shopper's Guide to Pesticides lists of fruits and vegetables.

The Story of Bottled Water

Today is World Water Day and in honor of that I am sharing this fantastic website with you - www.storyofbottledwater.org This 7-minute animated ﬁlm discusses the myths about tap and bottled water.

Fortunately for our planet, more people are becoming aware about how ridiculous it is to buy plastic bottled water. A Harris Poll found that 29% of the people surveyed switched back to tap water this year. "Bottled water usage is in decline in the United States for the ﬁrst time in three decades, thanks in part to the hard work of our partners on this ﬁlm. We hope this ﬁlm helps to drive the ﬁnal nail in this huge rip off," said Annie Leonard.
Posted by me :) at 11:56 AM 1 comment: Links to this post

Labels: 5 Reasons to Give Up Bottled Water, be the change, reusable bottles

No they didn't change the traditional medals of Gold, Silver and Bronze to green, but they did use reclaimed metal for the first time in this year's Olympic and Paralympic medals. Vancouver-based Teck Resources extracted gold, silver, and copper from old electronics using a smelting process on cathode ray tube glass, circuit boards, and other computer parts. A total of 2.05 kg of gold, 1,950 kg of silver, and 903 kg of copper were reclaimed and used. Even though this is just a small percentage of recycled material in each of the 1,000 medals awarded, it is a start. The mining of gold and other metals is harmful to the planet, so reducing the amount of mined metals to any degree helps the planet. Hopefully future host cities will be inspired to build on this effort and increase the amount of reclaimed metals in future Olympic medals.
Posted by me :) at 9:21 AM No comments: Links to this post

Reduce your impact on the planet by choosing to shop greener.

2. Remember your trash can be someone else's treasure - sell unwanted items on ebay or craigslist or donate them to the local thrift shop.

3. When making purchases ask yourself whether you really need to upgrade something that works just fine.

4. Rent seldom used items instead of purchasing them.

5. Shop locally and support small businesses.
Posted by me :) at 8:07 PM No comments: Links to this post

Labels: be the change, green living

I just discovered a delicious new organic tea - Tazo's Organic Apple Red. It is an African red tea with a touch of apple, cinnamon, and caramel. It is caffeine free, so it is perfect for the cold nights we've been experiencing lately.

Tazo tea boxes are made from 55% post consumer recycled materials and are recyclable. For more information on Tazo's organic teas check out www.Tazo.com.
Posted by me :) at 10:57 PM No comments: Links to this post

1. Choose only organic body care products for your bath.

2. Clean green - make your own cleaners from items in your pantry.

3. Choose soy candles instead of petroleum based ones.

4. Take your shoes off at the front door, to limit the toxins tracked throughout your house.

6. Improve the air quality in your home with houseplants.

9. Unplug appliances and electronics when not in use to avoid phantom energy use.

10. Paint your walls with no-VOC paints to avoid your exposure to toxic chemicals.
Posted by me :) at 10:48 PM 1 comment: Links to this post

1. If every American gave up one paper napkin a day we'd save a billion pounds of paper from going to landfills each year.

3. At beach cleanups, cigarette butts are the most common form of trash found, usually one in every five items collected is a cigarette butt.

4. If everyone in the US went vegetarian just for one day, the U.S. would save 100 billion gallons of water, 70 million gallons of gas and 3 million acres of land. We would also eliminate greenhouse gas emissions equivalent to 1.2 million tons of CO2.

5. The US discards 60 million water bottles a day, most are not recycled.

6. One of the largest collections of garbage is in the Pacific Ocean - the Eastern Garbage Patch floats between Hawaii and California and scientists estimate its size as two times bigger than Texas.

7. Human development and expansion is causing species to become extinct at 1,000 times the natural rate.

8. According to the U.S. Department of Energy, 75 percent of the electric power consumed in the average home comes from appliances like VCRs, televisions, stereos, computers, and kitchen appliances when they are turned off but plugged into the wall.

9. Babies are born with more than 200 man-made industrial chemicals in their blood.

The Environmental Working Group has composed 2 lists to help you decide which produce is worth the extra money to purchase organic - The Dirty Dozen - the 12 foods with the most pesticide residue & The Clean Fifteen - the 15 foods with the lowest levels of pesticide residue. If you can't afford to buy everything organic, be sure at least to purchase organics for the foods that appear on the Dirty Dozen List. 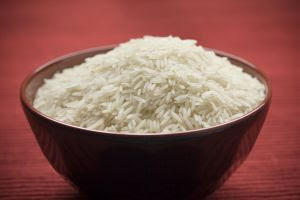 I first wrote about Free Rice 2 years ago, at that time the site had donated 14,165,837,150 grains of rice to the United Nations. Since then the site has grown dramatically and has now donated over 73 billion grains! The site has expanded its offerings beyond just vocabulary words to include famous paintings, foreign languages, grammar, math, world geography, and chemical symbols. For each correct answer the site donates 10 grains of rice through the United Nations World Food Program to help end world hunger. It's a win-win situation - you challenge yourself to improve your knowledge and food goes to those in need!
Posted by me :) at 2:07 PM No comments: Links to this post

Labels: be the change, Free rice

1. Look up your beauty products on www.CosmeticsDatabase.com. Always read the ingredients in the products you use and be sure to avoid triclosan, fragrance, and oxybenzone.

3. Limit how much canned food you eat, as many can linings contain bisphenol A (BPA)-which is linked to cancer.

4. Avoid using plastics whenever possible and choose the ones you use carefully to avoid BPA. Never microwave plastic containers.

5. Wash your hands frequently to reduce illness. Avoid using anti-bacterial soaps which are bad for the environment and contain pesticides.

6. Cook with cast iron or stainless steel cookware to avoid the toxic fumes that can be released from non-stick cookware when it is overheated.

7. Establish a "no shoes in the house" policy to reduce pollutants from outside being tracked throughout your house.

8. Use green cleaners made from items from your pantry - baking soda, vinegar, and lemons can be combined into some amazing cleaners.

10. To help with seasonal allergies and stuffy noses caused by winter colds, try using a neti pot instead of over the counter decongestants.
Posted by me :) at 10:02 AM No comments: Links to this post

My husband and I have supported Sea Shepherd and their missions to protect animals for years. Sea Shepherd has experienced some recent fame due to the "Whale Wars" series on Animal Planet, however they are by no means new to the animal conservation world. The Sea Shepherds lead by their fearless captain Paul Watson confront Japanese whaling ships as they illegally hunt for whales in the frigid waters of Antarctica.

According to the Sea Shepherd website, Sea Shepherd Conservation Society (SSCS) is an international non-profit, marine wildlife conservation organization established in 1977 whose mission is to end the destruction of habitat and slaughter of wildlife in the world's oceans in order to conserve and protect ecosystems and species. "Sea Shepherd uses innovative direct-action tactics to investigate, document, and take action when necessary to expose and confront illegal activities on the high seas."

The Japanese whaling ships continue their annual hunts by claiming to be conducting research with the Institute of Cetacean Research. The ICR claims to be conducting scientific research on whales however they sell the meat of the whales they hunt. Whether you agree with the Sea Shepherds methods - stink bombs, prop-fouling ropes, and interfering with the whale hunts - they have brought major media attention to the devastating and illegal whale hunts.

This week the confrontations between the whalers and the Sea Shepherds escalated when a whaling ship collided with the Shepherd's boat the Ady Gil shearing of the bow. The Ady Gil was valued at 2 million dollars and is a complete loss. 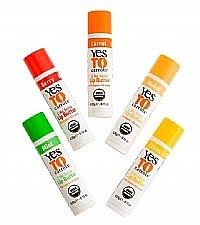 I have found a yummy new lip butter I just love - Yes To Carrots' C Me Smile. It is all natural with extracts from certified organic fruits and vegetables, it contains no petroleum or phthalates, is paraben-free and is not tested on animals!

Why is organic lip butter a smart choice? According to Glamour Magazine's June 2002"Beauty Quickie Tip," "women inadvertently eat 4 lbs of lipstick" in a lifetime. Every time you lick your lips, eat or drink while wearing lip product you ingest a small amount of the product so be sure to choose organic products.

C Me Smile is available in five yummy flavors - Berry, Carrot, Citrus, Melon and Mint. Check out www.yestocarrots.com for more delicious info.
Posted by me :) at 10:12 AM No comments: Links to this post

Happy 2010! Here's my family's green goals for this year:

1. Plant an organic garden this spring.

4. Go on an eco-tourism vacation.

5. Learn to make my own soap and beauty products.

6. Support local merchants, crafters, and artists with my purchases.

7. Move to a home that allows use to reduce our driving.

8. Limit purchases to quality, earth-friendly items that will last.

9. Get creative with using recycled items in my crafting.

10. Continue to educate others about the importance of going green and the simple changes they can make to live a little greener.
Posted by me :) at 11:05 AM 1 comment: Links to this post